Howard University today announced the appointment of Debbi Jarvis as the Senior Vice President of Corporate Relations effective October 1, 2018. In this role, Jarvis will have oversight of corporate relations and is charged with developing and implementing a global strategy for corporate development and the funding of those programs. Further, she will oversee the management of WHUT and WHUR, ensuring their business operations are in alignment with Howard’s mission.

“I am pleased to welcome veteran business leader Debbi Jarvis to Howard University in the new role of SVP of Corporate Relations,” says President Wayne A. I. Frederick. “Ms. Jarvis brings a wealth of knowledge in the corporate relations that will complement many of the innovative programs we’re developing at Howard. As a member of my leadership team and Cabinet, she will participate in the overall management of the institution.”

Jarvis has a demonstrated history of leading teams to develop strategies and programs around corporate goodwill, philanthropic initiatives, corporate reputation and image building through effective nonprofit and community engagement, and marketing and communications.

“I consider myself a servant leader,” says Jarvis. “I serve to lead, I lead to serve. This role is a perfect fit with all that I’ve done and continue to do as a collaborator to oversee and create new partnerships that students and faculty can benefit from and that will further strengthen the Howard legacy. I look forward to working with Dr. Frederick to continue to make his vision for the success of Howard, a reality.”

Although Jarvis is excited to officially join the Howard family as a staff member, she’s been a Bison by choice for quite some time. The former NBC4 anchor is married to Ernest Drew Jarvis, the grandson of the late, great Dr. Charles R. Drew, blood-plasma pioneer and former chief of surgery at Freedmen’s Hospital, now Howard University Hospital.

“It goes without saying just how important Howard has been to my family. Dr. Drew’s name is synonymous with the success of Howard University Hospital, an institution with a phenomenal reputation and history in the medical profession for African American doctors and beyond,” says Jarvis. “My family is committed to Howard and I am honored to carry on that commitment because we truly have Howard, in the blood!”

Prior to becoming VP, she managed PHI’s media relations department and served as the company’s media spokesperson and provided counsel to the CEO and executive leadership team. Before joining Pepco, Jarvis worked at NBC4 – Washington, where she was a reporter and anchor for nearly a decade. At NBC4 is where she fell in love with the DC community and worked to provide a “voice to the voiceless” through her reporting. During her tenure, she anchored the #1 rated weekend morning news show. Jarvis was the anchor on the fateful morning when an arrest was made in the DC Sniper Shootings, as well as when the Space Shuttle Columbia Disaster occurred, both resulting in #1 ratings for the time period.

Jarvis is a community advocate and has a passion for being a servant leader as evidenced by the creation of significant community projects. Among her many charitable roles, she served as the Washington Area Women’s Foundation Leadership Luncheon co-chair and secured the trifecta of women leaders to receive the visionary award: Mayor Muriel Bowser, Chief Lanier, and Chancellor Henderson. She has also chaired the annual “Courage on Canvas” Red Carpet event for nonprofit Life Pieces to Masterpieces art exhibit, and she created the first three-day offsite Pop-up Shop for Goodwill, helping to raise $20K from item sales.

Jarvis earned a bachelor’s degree in International Business from Hope College in Holland, Mich.; took graduate courses at American University in broadcast journalism as well as classes toward an MBA at Southeastern University. She participated in the CSR Executive Education Program at Harvard Business School. 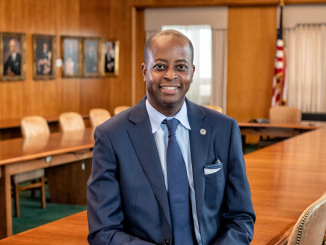