Just 24 hours after the announcement that NBA champion Steph Curry is supporting a new era of golf teams at Howard University for the next six years, we spoke with the institution’s president Dr. Wayne A. I. Frederick about how he’s raising awareness about sickle cell disease, advances in technology, and the Golden State Warriors star’s altruism.

There are a host of wins on the horizon for Howard University which are complemented by the fact that a three-time NBA Champion has partnered with them to launch the school’s first NCAA Division 1 men’s and women’s golf teams by 2020. Dr. Frederick enlightens, “The humanitarian aspect of this is it will afford students scholarships to attend Howard; and you have a black NBA player in this day and time supporting and recognizing a historically black college and university. Howard is one of America’s great investments.”

To oversee and operate a great investment successfully, you must be a great investor with stamina and willpower. Since January, Dr. Frederick, has been running 5Ks once a month and he launched his own Run to Cure Sickle Cell effort this year with all proceeds going to Howard University’s Center for Sickle Cell Disease. Sickle cell disease affects over 4 million people worldwide, and the president is on a campaign to raise awareness and funding.

September is Sickle Cell Awareness Month and on September 21 is the second annual Stomp Out Sickle Cell Move-On event at Howard University Hospital plaza. Funds raised through the Run for Sickle Cell campaign will go toward clinical and translational research programs with a focus on new treatments, opportunities for curative therapy and community outreach programs to screen for the sickle cell trait.

Here’s more of Dr. Frederick’s interview where he shares his personal battle with sickle cell disease.

I have to be honest. It’s the only place I could have matriculated. I had a chronic illness, Sickle Cell, when I applied at age 16. It was safe and a place that could nurture me and give me a family type of atmosphere. Howard has such a reputation in the Caribbean. Prime Minister Eric Eustace Williams of Trinidad and Tobago and the physician who delivered my two younger brothers are Howard grads. There is such a rich history of excellence.

A master teacher and noted researcher, you earned a Bachelor of Science degree, Master of Business Administration and a Doctor of Medicine in a combined six-year program and completed your surgical residency training at Howard University Hospital. You returned to Howard University in 2006, and served as Division Chief in the Department of Surgery, Director of the Cancer Center, Associate Dean in the College of Medicine, Deputy Provost for Health Sciences, Provost and Chief Academic Officer, and Interim President. Through your years of experience and research, please share how unconscious bias manifests in academic medicine?

In general, unconscious bias manifests itself in so many ways. It really affects academic medicine when you look at the opportunities in the field. In 1978, there were more African American males who applied to and enrolled in medical school than in 2014. When you look at women in surgical specialties, while that number has grown, it doesn’t fit the population at large. When you look at all the full professorships across all the fields, we are significantly underrepresented. When I came to Howard, we had 13 deans at the time and only one was a woman. We worked hard to get people to recognize it. We interviewed a diverse pool of applications. I always insist on getting three finalists. Now we have 10 of our deans at Howard who are women. That doesn’t happen by accident.

Some may ask, what does that have to do with taking care of patients? It impacts patients. If you are looking at a disease process that you want to find a cure for, sickle cell anemia for example, we know more about that genetic disorder and have for a long time. But when you look at the funding for the organization, it pales in comparison to many other diseases. I’m not saying we should take money away from research in other areas. My point is, we should be expanding the overall pie. That won’t happen if we don’t recognize our unconscious bias.

How does having sickle cell anemia since birth inform your perspective on revolutionizing treatment for it?

It has influenced me significantly. Being in a hospital bed in severe pain can create a feeling of almost helplessness. It’s not a good feeling as you can imagine. One of the perspectives that I have had about medicine is making sure I don’t lose the humanity of it. You can’t take for granted the human interaction or the time someone takes to understand the completeness of your circumstance, your support system and lack of it. All those things influence the outcome. There is a lot going on in stem cell transplantation and trials. We have to expand and make sure we make it available to [an increased] number of people because a cure is on a horizon.

What was the pivotal moment when you determined academic medicine was important to you?

I had a mentor who was very much into academics. I love seeing young people gain knowledge and I like to see lifelong learning and mature intellect, especially with surgical oncology changing all the time.

If there was one thing in this world that you could change in a day, what would it be?

If we’d just take time to love each other. It sounds cliché. I feel like we live in a time where technology makes us move so quickly that we disregard one another in our haste and draw judgement. Technology provides us with so much information in a short period of time. We need to slow ourselves down more to interact with each other.

How has technology impacted higher education?

The way technology has impacted higher education is boundless. We are able to give information and share it. The acquisition of information and knowledge, and technology being able to distill things into a search engine is revolutionary, and it has given us all this information at our fingertips. When you look at what is to come with artificial intelligence, we are getting into a space in time where personalized medicine is going to take over. I am really humbled by what we can do with technology.

Get More Info on Howard University 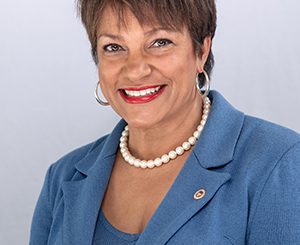