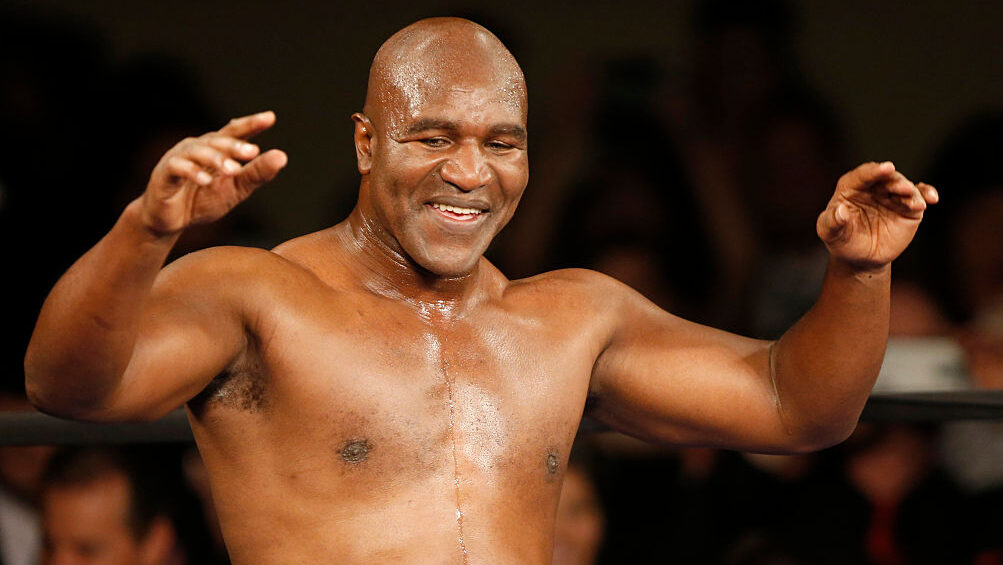 Boxing legend Evander Holyfield is both critical and complimentary of recently crowned heavyweight Oleksandr Usyk as a hypothetical opponent.

Holyfield didn’t see the body attack from Usyk as “The Cat” dominated and dethroned IBF/IBO/WBA/WBO champion Anthony Joshua on Sep. 25 at Tottenham Hotspur Stadium in London.

Despite that, “My question is, ‘What about Usyk’s inside game? Does he have one?’” Holyfield said of the man who joined “The Real Deal” and England’s David Haye as the only former cruiserweight titleholders to also capture heavyweight crowns. “I’m a gladiator who brings it, applying pressure with combinations to the body, the head, and back to the body. I didn’t see Usyk fight on the inside at all.”

Holyfield lost unanimous decisions to Byrd (December 2002) and Ibragimov (October 2007). Holyfield split bouts with Moorer, losing by majority decision in April 1994 before flooring him five times and stopping him in the eighth round of their rematch in November 1997.

“No doubt I had problems with left-handers. Oleksandr Usyk is a very good boxer,” said Holyfield, who turns 59 on Oct. 19. “They move the opposite way, make it hard to crowd them and can hit you with big shots you don’t expect.”

Holyfield, who retired in 2014, compared himself to Usyk in an exclusive interview with Zenger News with input from blow-by-blow commentator Corey Erdman and boxing historian Cliff Rold, both of BoxingScene.com.

“It’s difficult to compare fighters from different eras,” Erdman said of the two men, each of whom is a devout Christian. “But Holyfield and Usyk share enough similarities to make it fun.”

In defeating Joshua, “The Cat” vanquished his sixth current or former world champion in 10 fights. A former undisputed cruiserweight titleholder, the 34-year-old Usyk (19–0, 13 KOs) also handed the 6-foot-6 Joshua (24–2, 22 KOs) his first loss in his native country, doing so in the same city that the Ukrainian earned a gold medal in the 2012 Olympics.

Wilder and Fury battled to a draw in December 2018, but Fury dethroned Wilder via seventh-round TKO in February 2020. A unification bout between Usyk and the winner of Wilder–Fury III would be appealing.

Usyk won his third heavyweight bout in 23 months, having beaten Chazz Witherspoon by seventh-round TKO in October 2019 and journeyman Dereck Chisora by unanimous decision in October 2020.

“There was a record in the cruiserweight division where Evander Holyfield became the champion. I thought about that, and I told my team, ‘Let’s make our own history, our own record, to beat Holyfield’s record,’” Usyk said.

“I watched and followed Holyfield for quite some time,” Usyk added. “I really appreciate and admire him moving up from cruiserweight and fighting big guys. Every one of us has our own page in history. He wrote his, and I’m writing mine.”

A bronze-medal winner in the 1984 Olympics in Los Angeles, Holyfield (44–10–2 with 29 KOs) was considered the greatest cruiserweight of all time before retiring in June 2014 at age 52 as the only four-time heavyweight champion.

As a cruiserweight (weighing between 180 and 190 pounds) from July 1985 through April 1988, Holyfield went 14–0 (12 KOs). That run includes being 6–0 (5 KOs) in title fights after earning the crown by split-decision in July 1986 over Dwight Muhammad Qawi and his fourth-round KO of Qawi in a December 1987 rematch and fourth defense.

Holyfield’s fifth and final cruiserweight title defense was an eighth-round TKO of Carlos DeLeon (April 1988) in a division established as 190 pounds in the early 1980s and changed to a 200-pound limit in 2004.

Holyfield was 12–0 (8 KOs) after dethroning Qawi compared to Usyk’s 10–0 (9 KOs) after dethroning previously unbeaten WBO champion Krzysztof Glowacki in September 2016. Because it came against a fellow Hall of Famer, Holyfield’s title-winning victory over Qawi is more substantial than Usyk’s win over against Glowacki.

Usyk had six defenses (three KOs) at cruiserweight, his second and third being a unanimous decision over previously unbeaten Michael Hunter in April 2017 and a 10th-round TKO of former titleholder Marco Huck that September.

Usyk fought three times in 2018 comprising a majority decision over previously unbeaten Mairis Breidis in January, a unanimous decision over then-undefeated Murat Gassiev in July and an eighth-round TKO of former titleholder Tony Bellew in November.

Briedis lost his WBC crown to Usyk, and Gassiev, his IBF/WBA crowns, the latter making Usyk an undisputed IBF/WBA/WBC/WBO champion. Bellew had scored consecutive 11th- and fifth-round TKOs of Haye in March 2017 and May 2018.

“Qawi and DeLeon would be formidable foes for Usyk,” Rold said. “Usyk’s ability to consistently win on the road is commendable.”

An undersized Holyfield debuted as a heavyweight in July 1988 with a fifth-round TKO of title challenger James “Quick” Tillis, with other heavyweight highlights including a 1-2 mark against 6-foot-5 champion Riddick Bowe in November 1992, 1993 and 1995.

Bowe outweighed Holyfield, 235 to 205 pounds, in their initial clash of unbeatens — a unanimous decision loss that dethroned Holyfield as IBF/WBA/WBC titleholder. Holyfield won their rematch by majority decision, with Bowe scoring an eighth-round TKO in their third fight.

Holyfield went 0–1–1 against 6-foot-5 undisputed champion Lennox Lewis, being outweighed 215 to 245 in their first bout. Holyfield handled Tyson by 11th-round KO in November 1996 and disqualification in the infamous “Bite Fight” in June 1997.

So who would win a Holyfield-Usyk clash?

“I would be more comfortable picking Usyk in a head-to-head matchup with Holyfield,” Erdman said. “His struggles with Michael Moorer and Chris Byrd can’t be ignored. Usyk is a more evolved version of that era of southpaws.”

“Holyfield would be the most rounded, difficult foe for Usyk beyond Briedis and would be able to match Usyk’s smart combinations,” Rold said. “It’s easier to pick Holyfield because we have a more complete picture of his best days, but Usyk would be in it.”

Holyfield had the last word.

“I would light up [Usyk] if I was the guy you saw against Michael Dokes or Dwight Muhammad Qawi,” Holyfield said. “But let’s just say If he fought in my era, I would beat him, and if I fought in his era, he would probably beat me.”

Edited by Matthew B. Hall and Stan Chrapowicki

The post Evander Holyfield Versus Oleksandr Usyk: Who Would Win? appeared first on Zenger News.