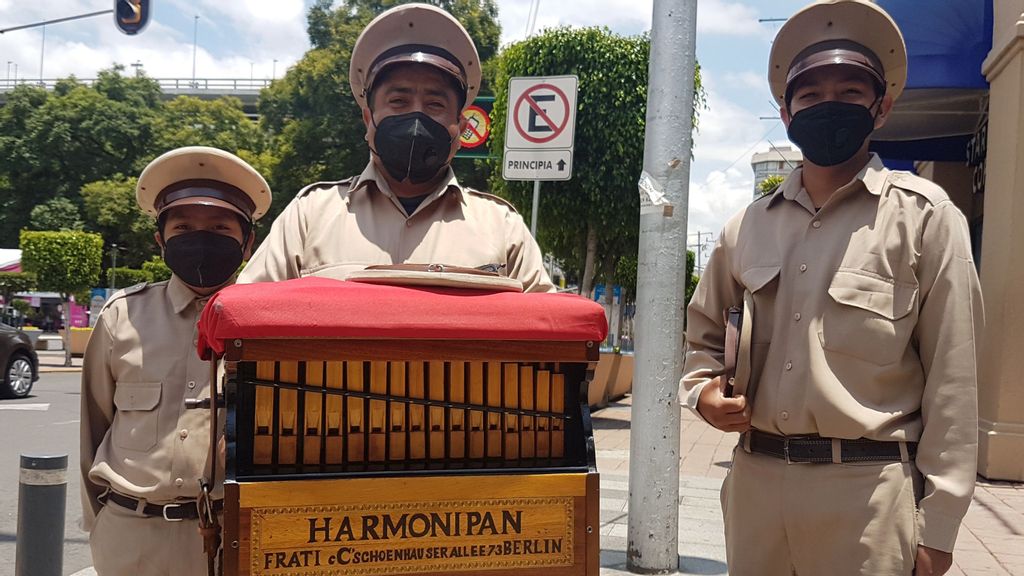 MEXICO CITY — An air of nostalgia floats through Mexico City when a street organ starts playing. Despite coming from a different era, these instruments are still part of the cityscape.

Street organs arrived in Mexico in the 1880s. An immigrant family from Berlin brought different instruments made in Germany, street organs among them.

They gained popularity among Mexicans in 1900, and people began to rent them in 1920, at the end of the Mexican Revolution. Musicians made money playing them or just gave serenades. About eight families owned street organs by 1950.

Gilberto Lázaro Gaona, who lived in a low-income complex in Mexico City’s Tepito neighborhood, acquired several street organs back then. His descendants continue with the tradition and have shifted from circus music to Mexican folk songs.

His daughter-in-law, Silvia Hernández, is the official restorer of original street organs, weighing from 100 to 120 pounds each.

After World War II, Germany stopped making street organs, and luthiers in some Latin American countries — such as Chile, Argentina, and Guatemala — began to make replicas. The story in Mexico is different. Although luthiers made some copies, musicians continued playing original German street organs, and their descendants have kept the tradition alive.

Isauro Villegas Escamilla, 38, has worked as an organ grinder for 25 years and does not want to leave the trade passed down from his grandparents and parents.

“I grew up around street organs. My great-grandfather played them, and the trade passed down from generation to generation. My dad has been an organ grinder for over 45 years,” he told Zenger.

Villegas works every day, grinding the organ from 11 a.m. to 7 p.m., and he remains optimistic about this job. Although it may be exhausting, the music fills both foreigners and locals with joy.

“What I like the most about this job is that I meet a lot of people. Some may not like the music, and I just tell them thank you or excuse me,” he said.

Each street organ has a maximum capacity of eight songs that sound when the grinder turns the crank. “Las mañanitas” [the Mexican birthday song], “Si nos Dejan” or “Amor Eterno” are popular songs.

Since owing a street organ is expensive and difficult to maintain, 90 percent of organ grinders rent their instruments, according to Villegas. Also, there are few originals left.

Villegas says he makes enough money to cover his expenses. In a day, he earns from $5 to $10, except for rainy days, when he earns only $4.

“Now, with the pandemic, it is harder for us to have an income, but we somehow manage to make ends meet. You have to be constant, play some music and ask for a coin,” Villegas said.

But he is not a lonely organ grinder; his two sons, Tomás and Isauro José, 15 and 11, work with him. His wife grinds the street organ, too.

For Tomás and Isauro, who are students, going with their father is an honor. They say they enjoy it and would like to keep the tradition alive when they grow up.

“It is a wonderful experience. I’ve been working here for five years. I do it because I like it. I love seeing people smile and get excited when they listen,” said Tomás Villegas.

Tomás is passionate about preserving his father’s trade. He would like to become an organ grinder even if he decides to pursue university studies.

The story is no different for Isauro José. “Here, I am doing something. When I’m home, I get bored. I want to finish my studies, and if my father lets me, I want to become an organ grinder,” he said.

Carlos Hernández Hernández has been working as an organ grinder for 15 years in downtown Mexico City. His workday begins at 10 a.m. and ends at 6 p.m.

“What I like about this job is sharing some time with people who are interested [in listening] and support us, such as foreigners who come on vacation,” he said.

Mexican organ grinders wear a uniform that seems to belong to another era. It is inspired by the uniform soldiers wore during the Porfirio Díaz regime (1876–1880 and 1884–1911) and after the Mexican Revolution. They are usually brown and have a hat, which is useful. Musicians ask passersby to deposit their money in the hat.

Despite having been recognized as a piece of cultural heritage in Mexico City, the tradition of organ grinding is vanishing, which puts musicians in economic difficulty.

Although Isauro Villegas has brought street organ music to the northern cities of Chihuahua, Tijuana, Hermosillo, Durango and Zacatecas and says people like it, his trade may disappear.

“I feel that this trade and tradition can die over the years, due to technology, the fact that music is changing and the ideas of a new generation,” he said.

Mexico’s Organ Grinder Union launched a campaign seeking support and donations to rescue the tradition in May 2021.

The union used the funds to buy pantries for organization members hit hard by the pandemic. In April, organ grinders couldn’t work more than 1.5 days a week. In February 2020, the average was 5.8 days.

The average daily income of an organ grinder used to be $12., according to the union. It dropped to $2.50 with the pandemic, per records of April 2021.

Translated and edited by Gabriela Olmos; edited by Melanie Slone and Fern Siegel.

The post Organ Grinders: A Mexican Tradition On The Verge Of Disappearing appeared first on Zenger News.