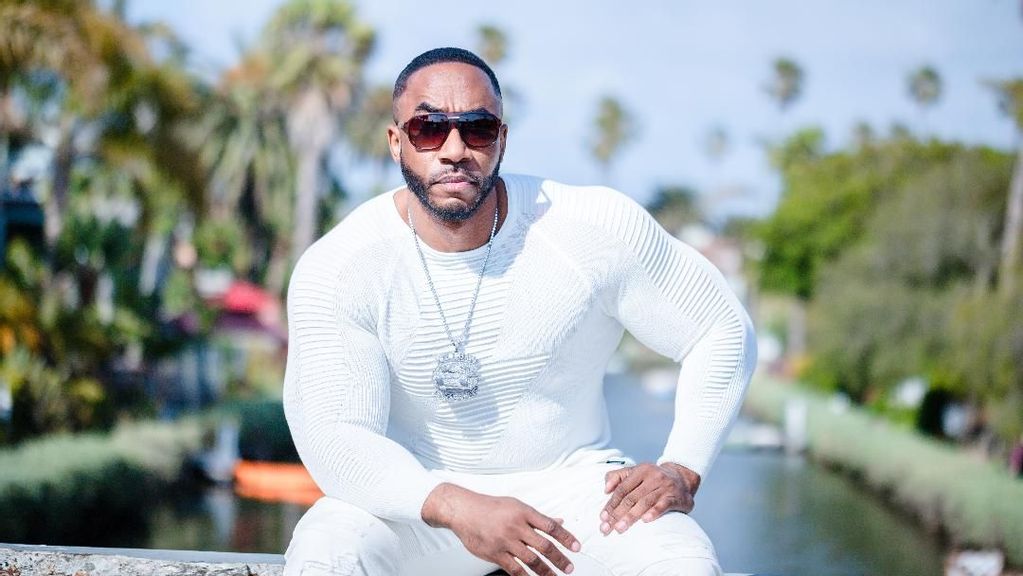 “You’re only as good as the company you keep” is an old Southern saying that has many meanings. Big Court is living proof of that: He has surrounded himself with like-minded individuals and reaped the benefits from those relationships. It’s nearly impossible to go wrong with music mogul Master P as a mentor.

Known as Master P’s right-hand man, Big Court is finding his lane in the podcast world. His “Holdin’ Court” podcast is one of the hottest new offerings on YouTube. He has secured some of the biggest names in the street, entertainment, and music worlds to come hold court with him. Using a sit-down, conversational interviewing style, Court can get some untold stories from his guests, as well as untold stories from his past.

Zenger had the opportunity to speak with the muscular, larger-than-life Kansas City, Missouri, native to discuss the podcast, his relationship with Master P and much more.

Zenger: We share a love for weightlifting. I know you’re more on the bodybuilding side, but I won a national championship in powerlifting. It’s different from bodybuilding, but the concept is the same.

Zenger: What got you into bodybuilding?

Big Court: It was just something I fell into when I moved out to LA. I started trying to work out just to get that lead-man body and ended up just really getting into it.

Zenger: Your “Holdin’ Court” Podcast is picking up steam. Great guests on there already. Where did the thought of forming this podcast come from?

Big Court: It was a skill set that I had that I never even realized I had. I was introduced to radio and that type of format when me and Master P had a show called, “Doin’ Tha Most,” on Playboy Radio. He just asked me to be a part of it because I was his homeboy. I had no prior experience. But P would always say, “People always say you’re so serious, but they don’t know how funny you are.” When we did “Doin’ Tha Most,” it was more fun. It was like Howard Stern type of thing.

One of my homeboys, J. Tweezy who is a part of No Limit [Records] as well, pulled me aside because he was a program director for many years. And he was like, “Court, you’re good at this.” I would go live on social media and give my perspective on topics, and people would gravitate toward it. It was the fans that were like, “You should do a podcast.”

Zenger: It’s not as easy as some may think to interview different personalities. Was it something that came natural to you?

Big Court: Very natural, because me being an artist for many years and already having experience in media being interviewed. I study, man. You always study anything you want to get into, so you can be efficient at it. During the pandemic, I spent a lot of time watching YouTube. I studied podcast and shows like “Drink Champs,” and “Gangster Chronicles.” I wanted to create something with my own touch to it.

My podcast is a hybrid. I wanna bring in the fun and the OGs. It’s about celebrating the OGs and the young life, as well. I borrowed that from “Drink Champs,” but also that authenticity of “Gangster Chronicles.” I started off as a gangster rapper. In recent years, I’ve been speaking to kids and mentor them and give advice, life coaching type of thing. I also wanted to represent for young cats in the streets too, because I’m able to articulate and live in both words.

I’m able to do an interview with Chico Brown, and we can talk coke talk, gangster talk and street stuff, because I come from that. But then we can talk introspectively and intellectually. I wanted to be that representation, the evolution of street guys. Where we come from and where we started, to where we end up. It’s about the journey. It was an easy transition for me.

Zenger: So we’re getting a front-row seat to your evolution?

Big Court: I always say, you evolve or you dissolve. I try to be an example for a lot of the cats that look up to me. Master P just told me the other day, “Court, you’re an OG now.” I’m at a different point in my life. I’m the big homie now. Youngsters call me “Unc” now, and I embrace that. Sometimes us OGs have the answers, not just because we know everything and did everything right — many times it’s because we did a lot of things wrong.

I try to be that beacon of light to share, knowledge, wisdom and understanding. For me, it’s about leaving an imprint on the world. People don’t remember any of the material things you had; people remember how you made them feel. It’s about leaving a positive mark.

Zenger: Is there anyone you would like to have on “Holdin’ Court” and pick their brain?

Big Court: I can honestly say I was very excited to interview J. Prince. He was the top of my bucket list, and I started out with that. And Ice T  — he’s down to do it. I would also say Magic Johnson.

Zenger: I would say the one of the only times I had a little anxiety was when I interviewed J. Prince and Mike Tyson some time back.

Big Court: You’re lucky, bro. Mike Tyson would be another one on my list.

Zenger: Being from Louisiana, we have studied and supported, Master P diligently. What have you taken away from that experience?

Big Court: I’ve been with P for so long, so I’ve learned a lot. But you know when you’re so close to something, it’s not even that you study it, but you take on certain things. It’s like a brother or whoever you spend most of your time with, you start to take on certain characteristics. It goes both ways. That’s why it’s very important to surround yourself with like-minded people because you can pick up bad habits, too. Just understanding the work ethic. I have been privileged to see the inside of it. People think being a mogul or being proficient in your area is easy, and it’s not. It’s not for the faint at heart.

I don’t want to get too far off-topic, but sometimes us as black people tend to subscribe to notions of illuminati, like success is a phenomenon. And it’s not. What people sacrifice is their peace of mind, comfort, sleep and sometimes relationships. You don’t have the time to hang out because you have a mission. P goes — this dude works. He only operates off a couple of hours of sleep. And he’s constantly going from one thing to another. You can have vision, plans and aspirations all day, but your success is really contingent upon your execution and consistency.

He always said, “Court, we’re not selling CDs, we’re selling consistency. McDonald’s not selling hamburgers, they sell consistency.” You know, we just spoke about powerlifting and bodybuilding. They are also about consistency. And you don’t get results right away. That’s success — you gotta give a whole lot just to get a little bit. It all starts with mindset. Whether you think you can or you think you can’t, either way you’re right.

Zenger: Master P was in the Bay Area (San Francisco), but we will always look at him as a New Orleans product. How does a guy from KC Mo catch P’s attention?

Big Court: When I got with No Limit, this was 1995-96, and he was still in the Bay Area. The Bay Area and Kansas City have always had a kinship, musically and street-wise. It’s funny because I didn’t even know who [Master] P was. My barber who used to cut my hair when I was a teenager used to bring regional acts to the city. And I remember him cutting my hair one day and he was like, “Yeah, I got Master P coming.” I’m maybe 15 and I had no idea who this dude was. I was like, “Who is this Master P dude ya’ll keep talking about?” Finally, I listened to “The Ghettos Tryin to Kill Me!”

What I did in Kansas City, I had dreams and aspirations of being bigger. I didn’t want to stay local. This was before social media, obviously. So, you had to get a record deal. I was 17-18 years old; I got the information off the back of my tapes and CDs, and I used to send press kits to Jive and all these big companies, like Atlantic, and it would come back saying, “We don’t accept unsolicited material.” I didn’t even know what that meant.

My common sense led me try to go after some smaller labels. I went after Ruthless Records, No Limit, Black Market in Sacramento, Rap-A-Lot. We were talking with Ruthless Records for many months. I thought we were going there, but Eazy-E ended up dying, so that didn’t happen.

With No Limit … it was just God. [Master] P was the one that had a voice mail number on the back of his tapes. What I used to do, I would call the number that went to his office, and I would fill the voice mail up so nobody else could leave messages (laughing). He told me years later what had happened. He just got tired of me being so persistent. So he sent Mr. Serv-On [Corey Smith] to the office and was like, “Man, this dude from Kansas City keeps calling me, go get his tape.” He got the tape, and I was staying with my father at the time. I had just got off of house arrest. P called my dad’s house because this was before cellphones. It went from there. He put us on “Down South Hustlers,” and it was on from there.

In a nutshell, it was me being hungry, consistent and getting on people’s nerves. Shout out to this lady named Cassandra Ware at Ruthless Records. I used to bug the hell out of her. We got to know each other, that’s how much I harassed them people. That’s why I tell these youngsters, when you really want it, you gotta go after it. Don’t make no excuses. It’s much easier now to get in contact with people.

Zenger: I appreciate the time. Is there anything else you want to add?

Big Court: We are pushing forward with the “Holdin’ Court” podcast, Producer Ken, we have worked on several projects together, but this is the one that’s really coming to fruition and showing promise. August Keen is a part of the team. I couldn’t do it without those guys. We have had amazing guests, including Chico Brown, Silkk the Shocker, Jazsmine Lewis, J. Prince, Guerrilla Black, Lil Eazy-E and Boskoe100. We have a lot of content, so I know I’m missing some people.

I’m also a TV/movie producer, so me and Jazsmine Lewis have a TV show that we developed called, “Twelve,” starring Stick Fingaz, Master P and Jazsmine Lewis. We have some other big names that we are talking with, so I don’t want to throw that out there prematurely. We’re talking to some big platforms and networks to get that in the works. I have several other shows that I’m working on and just really producing content. I’m big in the gym, but I’m all about inspiring people to be bigger in life.

The post Master P Protege Big Court Is The Judge And Jury On New Podcast appeared first on Zenger News.