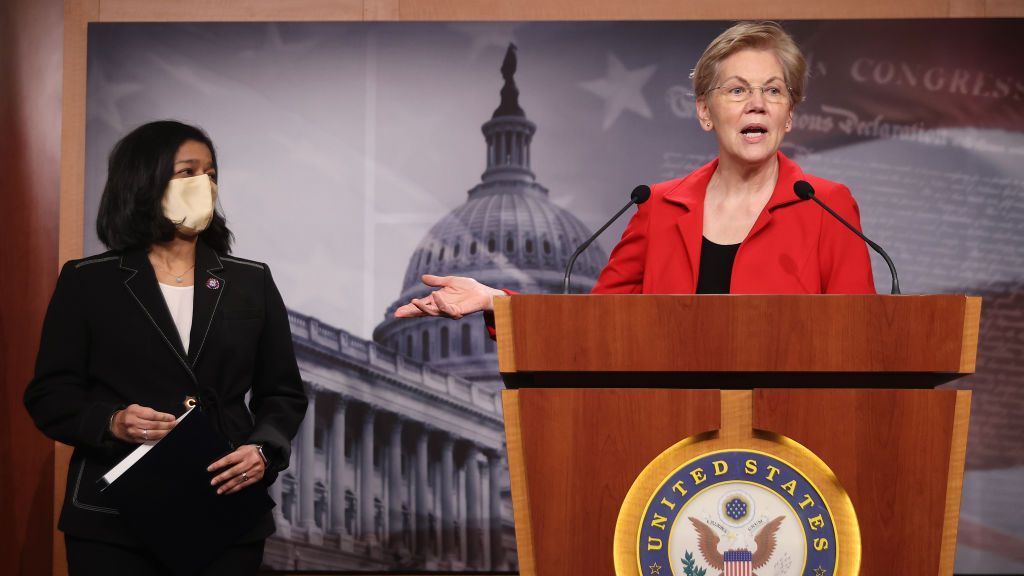 After calling for a wealth tax on billionaires and a levy on stock trades, Sen. Elizabeth Warren (D-Mass.) is stirring new controversy with her calls to put funding of the Internal Revenue Service beyond the reach of Congress — a move, she says, would facilitate tax enforcement, but which critics say could disproportionally target her political foes.

The “Restoring the IRS Act of 2021,” which Sen. Warren introduced in May, proposes a budget of $31.5 billion for the IRS — a nearly-triple increase on the present $11.9 billion. The bill would also allocate funds on a mandatory basis, rather than relying on yearly appropriations from Congress.

It would additionally change reporting requirements to increase scrutiny on gross inflow and outflow from businesses, which Sen. Warren says would help it target tax fraud and “provide the IRS with the resources it needs to go after wealthy tax cheats and close the tax gap.”

Sen. Warren bolstered her case by pointing to a recent ProPublica report about the stark difference between the wealth of the country’s richest people and the comparatively tiny effective tax rates they pay.

However, Republicans are already crying foul, accusing their opponents of trying weaponizing tax.

Sen. Ted Cruz (R-Texas), for example, on June 14 told Fox Business he believes Democrats and the administration of President Joseph R. Biden Jr. were already laying the groundwork to target the wealthy.

“When it comes to the IRS, this is an abuse of power,” Cruz said after the release of ProPublica’s report, which showed the 25 richest Americans have annual tax bills of about only 3.4 percent of their wealth, while income tax rates in the top bracket are about 10 times as large.

“It’s a grotesque abuse of power,” Cruz said. “It’s politicization of the IRS. We saw Barack Obama politicize the IRS, and we’re just a few months into the Biden administration and they’re politicizing the IRS.”

In 2013, a controversy over so-called tax “targeting” saw Republican lawmakers accuse federal tax authorities of undertaking additional scrutiny against groups with “Tea Party” in their name, with many suggesting that the administration of then-President Barack H. Obama was targeting political foes.

A contemporaneous Justice Department investigation found no evidence of politically motivated targeting, but in 2017 the administration of then-President Donald J. Trump paid a settlement to some 400 conservative groups for wrongful “heightened scrutiny and inordinate delays.”

“Republicans don’t trust the IRS, especially when the other party is in power,” William Zumeta, professor of public policy and governance at the University of Washington, told Zenger News.

“They may genuinely fear that the administration would try to use the IRS to target conservative-leaning organizations that are set up as nonprofits,” he said, adding he was never convinced the fears were based on anything: “I doubt that it would actually happen due in part to a strong nonpolitical culture among IRS staff.”

Some critics of the proposal, though, say the weaponization of tax collection can be a slippery slope.

A recent Wall Street Journal editorial, for instance, argued that making the funding of the IRS mandatory, instead of dependent on Congress, would unduly insulate the agency from fears of losing funding if it is ever found to have politically targeted certain taxpayers.

“There’s doubtless an element of posturing over this issue, but also some sincere worries,” John Donahue, the Raymond Vernon senior lecturer in public policy at Harvard University, told Zenger. “Politicizing the tax code is the fast lane to authoritarianism, and either party is right to be sensitive about it.”

“That said,” he added, “given that such a large share of charitable donations are to churches, and given that highly partisan churches lean right, it’s silly to claim that enforcing the law is only legitimate if there’s no disparate impact on Republicans.”

“[There’s] no guarantees — it’s possible to squander increased funding to no effect — but in my book the odds are very high that more funding for the tax-collecting agency will lead to better performance on tax collection,” he said. “Perhaps not sufficient, but very, very necessary.”

Warren and other Democrats argue that the absence of mandatory funding for tax collection hurts the agency’s enforcement power and widens the tax gap. By contrast, they say, beefing up the resources available to tax collectors would only end up paying for itself — and then some.

“There should be $4 in for every $1 the government spends,” said Caroline Weber, assistant Professor of Public Policy & Administration at the University of Kentucky.

She said that after years of significant funding cuts the agency was close to running on fumes, and that she did not understand opposition to better funding tax collection. “The IRS’ budget has been declining for decades, but there’s been a dramatic decrease in the last decade,” she said.

According to the IRS itself, the agency’s operating budget decreased from over $14 billion to under $12 billion between 2010 and 2019 — a decrease of over $2 billion, with the agency’s enforcement budget the primary target for cuts.

“From a policy perspective, it’s mystifying,” Weber said of the opposition to proper funding. “In terms of cracking down [on] evasion, putting more money into the agency so they have the resources and means to audit is very sensible.”

“Audits are costly and complicated. … In order to close a gap you have to people enforcing misreporting. If there aren’t any consequences, the needle isn’t going to move. If you expect to you’re going to be audited, you’re less likely to attempt evasion or avoidance.”

In April, IRS Commissioner Charles Rettig told the Senate Finance Committee that the tax gap likely exceeded $1 trillion per year — over double the last reported estimate of $441 billion. Other estimates suggest $700 billion that could be closed through better enforcement.

Biden’s “American Families Plan,” which he unveiled in April, emphasizes the “tax gap” but — in contrast to Sen. Warren’s hopes to triple the $11.9 billion annual budget and make it mandatory — it only proposed a $1.3-billion increase next year, and then $80 billion more over the next 10 years.

“Over the years, the rate of audits for higher-income brackets has gone down,” said Zumeta of the University of Washington. The proposed budget increases, he said, would not only bolster tax enforcement but also upgrade outdated computer systems and facilitate audits that may

“There’s a lot that’s already owed but simply not paid because it’s not audited,” he said.

Yet he noted Sen. Warren’s plans would, in the end, likely come up against strong Republican opposition in the Senate.

As a party “not enthusiastic about seeing government revenue capacity expanded,” fighting funding for an agency disliked by many voters already was a no-brainer, Zumeta said.

“Broadly speaking, the GOP is unfavorable to IRS funding, they’re not interested in boosting government revenue,” he said. “They see this as making it easier to expand government programs in general, which they for the most part oppose philosophically.”

(Edited by Alex Willemyns and Matthew B. Hall)

The post A Taxing Question: Mandatory Funding For The IRS? appeared first on Zenger News.