Roland L. Jones, Director- Office of Central Services, Prince George’s County, Maryland, is in part the by-product of an empowering leader. However, the whole of Mr. Jones is very much a manifestation of his vast array of unique personal and professional experiences! Recently appointed as Chairman of the Board of the Capital Region Minority Supplier Development Council, Mr. Jones possesses an unprecedented and especially fitting set of credentials in the area of procurement and supplier diversity that will enable him to lead the council to newfound relevance and deliver tremendous impact!

The National Minority Supplier Development Council is a membership organization first established in Chicago (1972) for purpose of creating an environment that fosters economic development rights and serving as a conduit between Minority Business Enterprises (MBE’s) and corporate America.

Sitting across his desk speaking with Mr. Jones on a festive New Year’s Eve… It became abundantly obvious to me that his profound focus and commitment to the administration’s Mission of maximizing every opportunity to “utilize the skills and abilities to put in place the type of strategies that will lead the county for the next 50 years.”

Yet still I came away with an even greater introspective measure of man; especially his grand appreciation and unbending and passionate belief in the importance of and the responsibility for each generation of African Americans to never cease sounding the horns of knowledge as it regards the historic contributions to business, science and culture made by our forefathers. Luminaries such as Banneker, Drew, Carver, Robeson, Hale-Williams, Matzeliger, Bath, Morgan, and many more pioneering giants whose shoulders of accomplishments we all stand upon!

Navigating the Corporate Arena to the Public Sphere…
The landscape of public service is littered with countless corporate executives hailed as saviors of many an inefficient and unresponsive government bureaucracy; who have failed to deliver often on a grand stage and occasionally departed back to the corporate world with a scarred professional reputation! After his graduation from Howard University (Washington, D.C.), Mr. Jones spent more than 25 years in the corporate arena in the areas Information Technology, Communications, Procurement and even Retail Management directing and managing a diverse range of ventures and companies from Start-ups, 8A firms, minority owned to Fortune 500.

Intrigued by this phenomenon of a somewhat revolving door of governance failure, I asked Mr. Jones how he had avoided some of the typical pitfalls. While never proclaiming any particular Management Style, Jones believes strongly that it’s most important to simply display a genuine level of humility and above all a keen ability to listen! He further mused that,” it would serve any new leader well to learn the organization structure and the nuances of the environment that propels the organization”…in a word what makes it work!

Perhaps his most telling assessment is the reality that dooms most corporate executive attempting to make the transition to government, is their failure to “understand and embrace the reality that inherently all decisions are political”. In this regard his grasp of this unwritten law of managing a vast bureaucracy makes him indeed a very ‘Rare Commodity’ or at the very minimum a template for ‘how to’ successfully navigate the transition from profits to public policy!

A Director with a Purpose…
Mr. Jones entered public service as an influential member of the newly elected administration of County Executive of Prince George’s County, Maryland, the Honorable Rushern L. Baker, III in 2011. The Baker administration inherited the reins of power at a time when the county government was steeped under the darkest cloud of scandal and corruption from the outgoing administration.

Perhaps taking their cue from the philosopher Sryus that “anyone can hold the helm when the sea is calm”; Mr. Jones and his colleagues had a greater mission and purpose beyond merely restoring the county’s soiled public perception and reputation for greater opportunities.

Particularly in the area of securing a diverse portfolio of pending and new economic development projects lay in the balance and became the administration and the Director’s primary purpose.

Jones’s initial responsibility within the Baker administration was Executive Director of the then Office of Minority Business Development Division. His immediate contribution was to re-brand the office and usher in a new era of county inclusiveness for all minorities and Native Americans by officially re-naming the Division the Office of Supplier Development and Diversity.

In 2014, Mr. Jones was sworn in as the Director- Office of Central Services, Prince George’s County, Maryland. 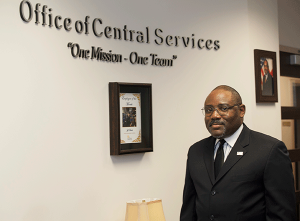 Intersecting Economic Development and Supplier Diversity
The Office of Central Services is the Purchasing Agent for the county’s $3.5 billion operating budget, managing seven (7) divisions of the Prince George’s County Government, 140 buildings, a staff 162 and as the county is experiencing dynamic growth unlike any in the surrounding municipalities… the Office of Central Services is easily and arguably the “most important agency in the county government.” While its daily purpose is to be responsive to Constituents, Suppliers and its Employees, Mr. Jones has set forth a more ambitious mission for his office… promote the growth and capabilities of the local and small business base within the county. According to Mr. Jones, the “Intersection of Economic Development and Supplier Diversity” is one of his office’s greatest purposes!

Inevitably to Jones that means” exposing local and small business owners to all aspects of running a business, fostering a ‘can do’ mindset and helping theses businesses to evolve and grow”.

Jones pointed out that in addition to the long awaited opening of the MGM project and Regional Medical Center, the county has more than $6 billion plus in private development taking roots throughout the county; in his words…’the train continues to move down the track.” Priority # 1 is to promote local business and grow the commercial tax base of the county” …in order to realize the County Executive’s other priorities of public safety, quality education opportunities and economic development. “My goal is to put an infrastructure in place that sets the standard for procurement” Jones said, “one that puts rules in place that best serves Suppliers and Certified Businesses and places a premium on quality, innovation and outside of the box forward thinking.” His message to businesses looking to earn a greater share of opportunities and projects within the county is simple and succinct…”Be ready.”

Business Development Reserve Program (BDRP)…A commitment to Local and Small Business
For local and small businesses, The BDRP is the single most critical county initiative for expanding their capabilities and clearing the way for procurement opportunities. Figuratively speaking it’s the County’s means of putting its financial teeth behind its stated goals of growing the local and small business commercial tax base and thus creating viable and sustainable employment opportunities for Prince George’s County residents. Mr. Jones is the strongest and most vocal advocate of the program; The BDRP is a county Partnership with CMT Services, Inc. (CMT) is a SBA- Certified HubZone MBE/DBE woman owned small business located in Hyattsville, MD. The program is a two year pilot designed to provide fifty (50) local and small businesses with strategies, tools and resources to gain skills to effectively compete for procurement opportunities with government agencies and public companies.

A Legacy of Accomplishments…
The list of accomplishments and county projects that Mr. Jones has been instrumental in bringing to reality are numerous. They include: Developing the strategy for implementation of legislation for First Source Hiring and Economic Development to give special emphasis to local, small and minority businesses (Jobs First Act), Re-branding the Supplier Development Diversity Division, Executive Advisor to the Economic Development Corporation Incentive Fund’s Review Team (EDI) and the Purple Line Light Rail Evaluation Team Chairman, Created and Executed the Social/Economic Strategy for the $1.2 Billion Storm Water Management Partnership Agreement, Instrumental in the development and directorship of the BDRP.

I posed the question of legacy to Mr. Jones…while he declined to respond on a personal level; Undeniably his most enduring legacy is one that will impact the county well beyond his tenure is the cultures of responsiveness that he helped create. True to the mantra of Leadership…“A culture of hard work and dedication focused on delivering value added solutions to improve the quality of life of Prince George’s residents daily”.

At some point, if for no other reason than term limit laws…The Success Story of Roland L. Jones will likely return to the corporate arena. Asked what new opportunity might best satisfy his passions professionally as imagined Jones can envision writing his final career chapters as a Chief Operating Officer overseeing a major corporation’s Procurement and Supplier Diversity Mission…Well Of Course!! 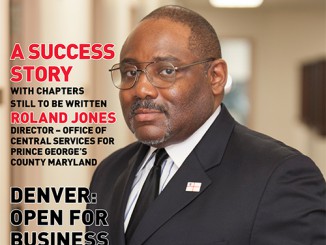 A Success Story…with Chapters still to be written!