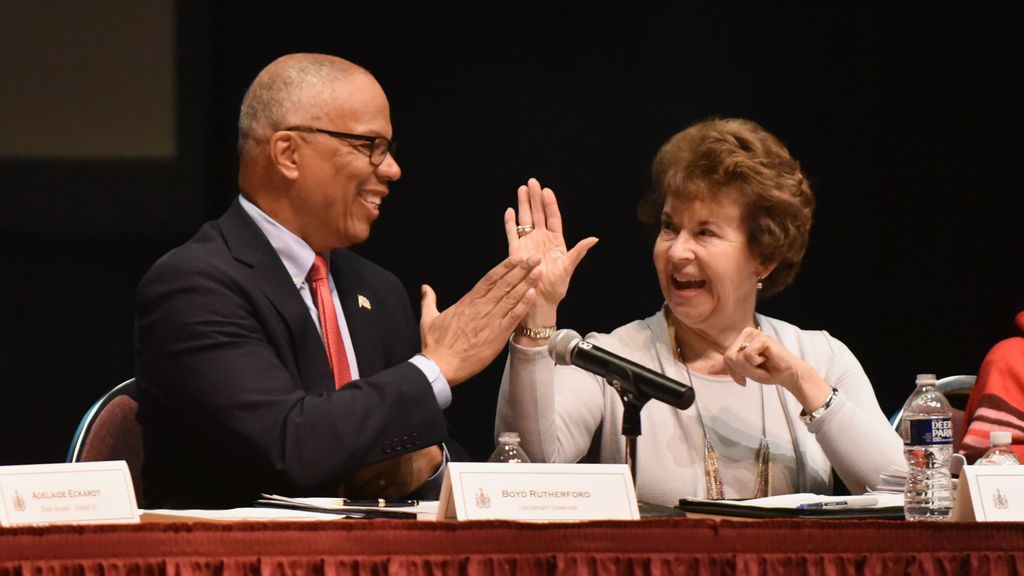 Barbara Allen is driven by her own pain to help ease it in others.

Through tragedy and adversity, Allen became an advocate for the healing of victims of substance abuse. The process has given her solace and peace.

“I call Barbara Allen the czar of recovery,” said Beth Harbinson, a friend and associate. “Barbara’s philanthropy, activism, leadership and work ethic have enabled her to make meaningful contributions toward the improvement of services for those suffering from these diseases.”

The eldest of 10 siblings, Allen lost two younger brothers — one was shot and killed by a person on crystal methamphetamine, she said. Another overdosed on meth.

The deaths of her daughter at birth, and brothers “created a powerful resolve in me not to let any other loved ones die,“ said Allen, who lives with her husband, Tom, in Ellicott City, Maryland.

Allen’s son, James Lee Stallings, died from an overdose of heroin and alcohol in 2003. He was 35. When her son died, she said, “it shattered my heart.”

Allen treats her own heartache by helping others as executive director of James’ Place, a nonprofit established in her son’s name. She works to provide scholarships for individuals needing help to move into recovery houses and invests countless hours in advocacy.

“If you have to label me, I’m a recovering codependent parent,” said Allen. “I knew about 12-step meetings, but I didn’t know squat when I came into advocacy. After a couple of years of grief, I started researching. I came across an article about the war on drugs. I felt as if that opened the door to some freedom and put fresh air in my face.”

Numerous recovery house managers and regional program coordinators as Allen for information about how recovery houses work and how to access funding or scholarships for those in recovery.

“Barbara Allen helped with a scholarship for two guys who moved into my sober living house,” said Dean Branham, who runs the six-man Concrete Recovery facility in Catonsville, Maryland. “She did a great interview with both of them and has kept in touch … making sure the two gentlemen are doing well.

“She spoke with them for significant lengths of time, which I appreciated. She’s been a great resource for me to talk through some inconsistencies within the recovery world, helping me navigate some of the daily obstacles we face helping people in recovery deal with fatal and progressive illnesses,” he said.

Allen’s altruism has spread to a number of services nationwide, including Compassionate Friends, dedicated to addressing family bereavement.

In addition, serves at the Howard County’s Domestic Violence Center and named Howard County Woman Of The Year in 2020. She also works with the Harford County-based Addictions Connections Resource Center and the Baltimore County-based Daniel Torsch Foundation for families and those struggling with substance abuse, addiction and mental health.

“Barbara has worked tirelessly in Howard County and in the state of Maryland to improve the lives of people suffering from substance use disorder,” said Harbinson, founder of the nonprofit SOBAR, which provides healthy nonalcoholic beverages at public social events.

“I’ve had the honor of working with Barbara on the Opioid Crisis Community Council for the last two years. Barbara’s leadership in that capacity has enabled a group of providers, community advocates and lay people to work toward solutions related to the crisis we face in the county and across the nation.”

Allen advocates for ways to help people who may be intimidated by or unaware of how to approach the problem.

“The average person denied by their insurance provider for mental health or substance use care often doesn’t have the education to understand the problem, the resilience to keep nagging. They don’t feel entitled to keep nagging, and they can be intimidated when they’re asking for help,” said Allen, whose efforts extend to organizations in Virginia and West Virginia.

“Part of the work I do with Lt Gov. [Boyd Rutherford] is answering questions like: Where are the logjams? Where are the problems? What are they? And one of the major issues is the pay rate for providers. People can make a lot more money working anywhere else than by working in state correctional facilities or in behavioral health.

“My work in substance use disorder advocacy is very broad,” she said. “Pick a topic or a cause, and I’m working on it.”