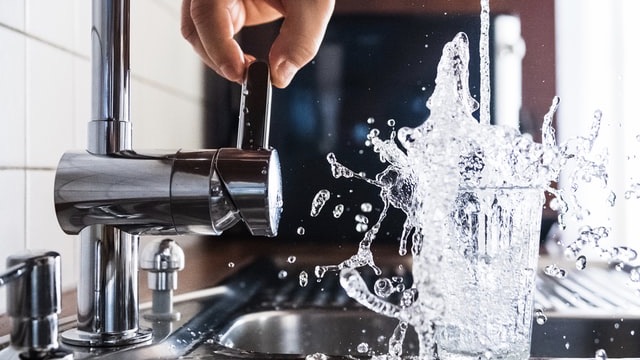 In most cases in Israel, the water that flows from the tap is completely safe and can be drunk without a second thought. Elsewhere around the world, however, this is not the case. According to the 2020 UN Global Water Development Report, around two-thirds of the global population experience severe water shortages for at least one month out of the year.

And even when water does reach the tap, it is not always safe to drink due to contamination — a widespread issue affecting roughly 500 million people worldwide.

In 2012 alone, an estimated 842,000 deaths from middle- and low-income countries stemmed from contaminated drinking water.

“In the United States, for example, water pollution of various kinds leads to tens of thousands of hospitalizations a year, and the estimated cost of treating these diseases and infections is over $1 billion,” said professor Shlomo Sela of the Department of Food Science at the Volcani Center, Agricultural Research Organization at Rishon Lezion.

This problem also extends to Israel where pesticides have historically been the major agrochemical pollutants contaminating the country’s groundwater aquifers, as well as pollution from sources like sewer line malfunctions or damaged pipes.

The possible catalysts of pollution are especially numerous when it comes to water from surface-level sources.

“In the past, when most of our water supply was from the Sea of Galilee, there was fear of pollution because of floods, which could mix with animal excrement or pesticides from agriculture in the area,” said Sela.

“Currently, a test is performed in Israel that aims to detect the presence of bacteria in water once a day, and only after 24 hours can the results be seen,” he said.

Due to the length of time required to obtain the test results, there may be cases where fluid contaminants will only be detected after they have already reached the tap in the consumer’s home. “That’s why we sometimes hear on the news about polluted drinking water from a particular area, and why citizens are asked to boil the water to kill the bacteria.”

For a country that has routinely experienced chronic water shortages, rectifying this issue is imperative. Now, an Israeli study has developed an innovative method to quickly detect bacterial infections in drinking water supply systems before it reaches the consumer.

Funded by the Israeli government’s Water Authority, the new study aimed to assess fluorescence spectroscopy as a tool to rapidly measure and evaluate the microbial quality of water.

“The new method we have developed offers the possibility of knowing about an adverse change in the quality of the water in the drinking water supply systems in real time,” said Sela.

It is intended to prevent situations in which water contaminants are detected too late, and to ensure that water free of bacterial contaminants reaches the consumer’s home.

The method is based on a combination of fluorescence measurements alongside advanced statistical tools and machine learning.

Sensors illuminate the bacterium at a specific wavelength and obtain a reflection at another wavelength. This makes it possible to detect infections up to the level of 10,000 bacteria within one milliliter of water.

According to Sela, the sensors will be scattered at critical points of the national water transport system. “The wider the layout, the easier it will be to identify the affected area,” he said.

“The contamination alert will be received on the main computer and the mobile phones of the operating personnel of the water supplier,” he explained.

“In a later phase, we are considering developing a cheap, but less smart sensor, which can connect to a domestic water filter machine in one’s apartment and warn of a decrease in water quality due to a filter not being replaced in time, for example.”

Another advantage of the technique is that it is able to detect all types of contaminating bacteria as opposed to just one particular type and can detect a general decrease in water quality if contamination does occur.

“While the method doesn’t specifically detect pathogenic bacteria at this stage, it is able to alert general water quality damage in real time and direct system operators to the area where the infection occurred,” he said.

Despite the optimism surrounding the development’s functionality, Sela said it is currently not possible to immediately apply the technique to the water supply systems in Israel due to various technical difficulties, and that it will likely take another three to five years before this is done.

It is clear that preventing water pollution is a crucial step in tackling the global water shortage. This shortage has intensified in recent decades following various processes of urbanization, increased irrigation of agricultural land, and changing patterns of precipitation, resulting in, among other things, the global climate crisis.

The problem is only likely to worsen in light of the growing global population, which is on track to reach approximately 9.7 billion by 2050.

Luckily, technological development has provided many tools and strategies to better manage overall water scarcity. Israel, for instance, has been well-known for its seawater desalination and reusing purified wastewater or effluent, in agriculture, stream restoration and forest fire extinguishing as a way to cut back on its freshwater use.

In order to address water scarcity problems and pollution, ensuring clean water access and sanitation for the entire world population has been included as one of the 17 Sustainable Development Goals set by United Nations-affiliated countries in 2015.

According to the U.N., one in three people do not have access to clean drinking water, which could result in the displacement of roughly 700 million people by 2030. In addition, two in five people do not currently have access to a basic hand-washing facility, which has serious implications for the spread of COVID-19 and many other pathogens.

Current data suggests there is still a long way to go to achieve the U.N. sustainable goal, which begs the question: Can the nations of the world really achieve it?

Technological and scientific developments such as the one presented in the Israeli study may prove successful, but there is also a need to inform and raise awareness of the issue among the public, which has the potential to help both Israel and struggling countries better cope with the crisis.

Detecting water contamination before it reaches your tap appeared first on ISRAEL21c.

The post Detecting Water Contamination Before It Reaches Your Tap appeared first on Zenger News.